We are aware that there are many different styles of baseball caps. We might have seen them many times but still might not know what they are called. Also, different styles have a different purpose, so a prospective buyer needs to know the differences before he decides to buy one. Trucker hats vs Baseball cap is a common topic for cap buyers. Therefore, it is essential to understand this difference.

The main difference between trucker hats vs baseball caps

Trucker hats are inherently a style variant of baseball caps. The difference lies in the material used to make them. The standard baseball cap has a crown that is made of six panels of cotton fabric sewn together. However, a Trucker hat has the back panels of mesh and the front panels of cotton or plastic, sometimes with foam on the inside, so that the front panels have a structure and are slightly raised.

What is the specific purpose of each cap?

Trucker hat is great as merchandise for a marketing campaign and also for long hauls. Though it can be worn casually, the reason for its emergence is the need for logo display and breathability.

A standard baseball cap is more suitable for baseball games or casual wear. However, this doesn’t mean that it can’t be used in a marketing campaign; it surely can be. However, the most popular use of the same is for sports, casual-wear, recreation, or fitness gear.

Baseball caps as a category of caps can have various purposes based on the variant under discussion. There can be as many as forty or more variations of a baseball cap, each having its own specific purpose.

What is a baseball cap?

A baseball cap is a category of caps rather than a single cap. There can be various styles depending upon the closure type, crown structure, accessories and decorations, profiles, patterns, material, and many other factors. It is a cap with a round crown and a visor in front to give a basic idea. Trucker hat is also a variant of the baseball cap.

General Characteristics of a Baseball Cap

What is a Trucker hat?

As mentioned previously, a Trucker hat is a style variant of a baseball cap. The most important aspect is that several back panels have a mesh-like material that makes the hat highly breathable. Apart from that, there can be a few variations of the trucker hat due to the purpose for which the hat will be used.

These caps are handed to truck drivers for free as part of various marketing campaigns, but these have also become a common casual-wear cap. At times, it is also known as the feed cap, as initially it was used in the farming sector in the US.

However, there was another variant of the trucker cap that was prevalent before the current version. It has a peaked crown, completely made of cloth, with a shiny leather visor in front. This version was worn by truckers and was also known as the Mechanic’s Cap. But nowadays, the mesh-paneled version is known as the Trucker’s hat.

General Characteristics of a Trucker hat This is a classic six-panel baseball cap with a structured crown and the button on top, which is also known as a squatchee. The cap has a stylish curved bill and a snap closure that allow a snug fit. It is available in several color variants and can be worn casually or in a ball game. It is a unisex option perfect for fitness routines such as running or jogging and recreational activities such as camping and hiking. This is a dad-hat, one of the many variants of a baseball cap. It has an unstructured crown that is soft and comfortable to wear. Further, it gives a relaxed and laid-back or casual look; therefore, it is perfect for casual wear, camping, running, and so on. It is also available in several color variants, so you have a variety to choose from. The buckle closure helps in adjusting the fit as per the wearer’s comfort.

This is a six-panel Trucker hat with mesh panels and structured front panels with the company logo. The cap is available in several color variants and is an excellent merchandise for marketing campaigns. The cap has a slightly curved brim that adds to the wearer’s style, and the mesh panels provide breathability in long hauls. This is a typical five-panel Trucker hat with the front two panels combined to add the big and colorful artwork at the front. It is available in several color variants, too, and has mesh panels with colorful and contrasting lining under the seams, giving the cap an attractive look. It is perfect for casual wear and can also be used by companies with very big logos.

Trucker hat is a style variant of the baseball cap. The Trucker hat has mesh panels that make it breathable and partially foldable; however, in the case of a six-paneled cap, the front two panels are structured, erect with foam lining for the perfect display of monograms or embroidered logos or even artworks. These are great as merchandize for marketing campaigns, perfect for long hauls, and also appropriate for casual wear.

Baseball cap is a huge category that includes several kinds of caps with two common characteristics, that are around the crown and a visor at front. Apart from this, there can be so many variations that you can’t just call any one single cap as the baseball cap. However, the standard baseball cap worn in baseball games has all panels made of cloth or cotton, is generally structured to provide a snug fit and lower need for adjustment. With this major difference, it boils down to the wearer’s choice of cap. Both can be worn casually, and both have their specific purposes too. But understanding the difference can help to narrow down the decision-making process. Panama hat vs Trilby. Learn the Difference (With Pictures)

Do you love to wear headgear? If yes, then we are sure that the first… 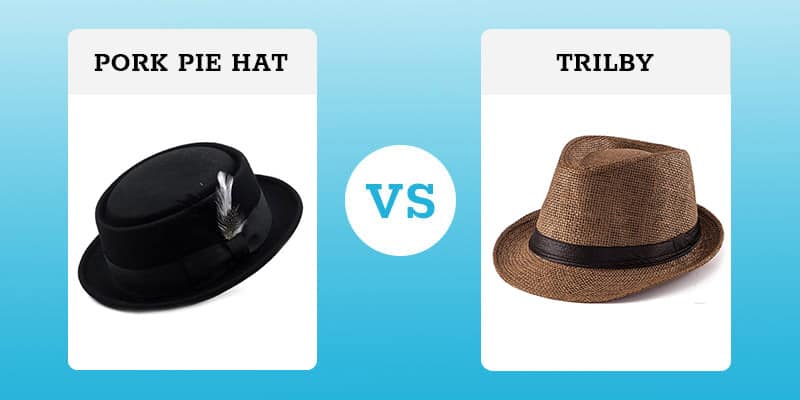 Pork Pie Hat Vs Trilby. The Difference (with pictures)

Are you a hat lover? If so, you must love to have a wide variety… Whatever it may be, whether you want to prevent your wool beanie from shrinking, pilling,…