The only reason why the Boater hat vs Panama hat debate has erupted is that both of them are straw hats. The similarity ends there. These two are poles apart when it comes to their specific shapes. Further, the Panama hat is made from a specific straw. At times, the Panama hat can be of many shapes or the same shape as the boater hat. The only distinguishing factor is the material used in the two hats.

Even though both are straw hats, there is a difference between the Boater hat and the Panama Hat. Therefore, it is important to understand the difference.

A Boater Hat is most commonly made from Sennit Straw. This is a cordage pattern of arrangement in which the dried fiber or straws are arranged in a circular pattern in a cylindrical manner.

A Panama Hat is most commonly made from Toquilla Straw, which is found in Ecuador. For this reason, Panama Hats are also known as Ecuadorian hats.

Another notable difference is that the Panama hat can take many shapes; however, the most common shape is Fedora. However, the Boater hat only has one signature shape.

In recent times, the Boater hat has lost its charm and is not worn that often. However, Panama hats are still very popular and one of the biggest exports of Ecuador. Fashion keeps evolving along with wearer’s tastes and preferences. In times to come, maybe Boater again gains popularity; however, Panama hats win the popularity race. These are still readily wearable, while Boater hats have fallen way behind.

What Is a Boater Hat?

The first thing that comes to anyone’s mind is a boat when we hear the name ‘Boater,’ which is right. The hat has a boating legend attached to it. It is similar to the Canotier hat that was worn by the gondoliers in Venice. Canotier hat had a ribbon hanging from its back while Boater doesn’t have it.

A Boater hat is made from Sennit straw and is very stiff in its construction. The dried straw is lined circularly to make the hat. Another key aspect is a striped ribbon around the crown, but this ribbon doesn’t hang behind like in Canotier hats. Also, the crown is shallow and flat at the top.

The shape, the ribbon, and the material construction together make a hat a Boater hat. If even one thing is missing, it is not a Boater hat. However, it is very easy to identify the Boater hat because of its distinctive crown.

Boater hats have lost their popularity in recent times. Now, these are worn on limited occasions, such as university sporting events or rowing events. Further, it is a part of the Princeton University uniform too. It used to be a popular boating or sailing hat and a fashion statement in its time. At times, this hat is worn in period movies and stage performances to bring authenticity to the production.

As it is made from straw, the Boater hat is more appropriate for summers. It was worn as part of the Straw Hat Day Tradition. It marked the switch from winter to summer hats in parts of Europe and the US. A funny extension of the tradition takes place at the end of summer. Wearers destroy their straw hat implying its uselessness as winter approaches.

Boater hats are more suitable for casual or semi-formal occasions.

What Is a Panama Hat?

Panama Hat is mostly a Fedora made of Toquilla straw. It is not the shape but the material that defines the Panama hat, also known as the Ecuadorian hat. It can be conclusively said that not all straw Fedoras are Panama hats, but those Fedoras which are made from the particular straw material is a Panama hat.

Toquilla straw comes from the Toquilla Palm tree. It is similar to the Palm tree; however, not the same. The weaving pattern of the Panama hat originated in Ecuador. It was first made by the Ecuadorian artisans and is therefore known as the Ecuadorian hat. This pattern is a UNESCO registered Ecuadorian heritage.

The color of the hats is mostly light, and these are lightweight, summer-appropriate hats. These are highly breathable and therefore preferred in summers and as beach accessories too.

These hats gained popularity in the mid-1800s during the Gold Rush era. It was a must-buy for the traders and merchants in the Gulf of Panama. During this time, it became so popular that it reached the opposite end of the world to Asia too. Even US President Theodore Roosevelt wore it on his visit to initiate the construction of the Panama Canal.

There are two weaving patterns used in the production of Panama hats; the Cuenca pattern is similar to Herringbone Tweed, while Brisa is a diamond-shaped pattern. Nowadays, other weaving patterns are becoming popular too.

At times, the weave is so intricate that it can take the weavers months to make a hats batch. The more intricate the weave, the higher the price. Some hats can even fetch a momentous $10,000 apiece. The highest quality products are called the ‘Montecristis.’ Panama hats contribute a sizable chunk to the Ecuadorian exports.

What Are Boater Hats for?

Boater hats are used in casual and semi-formal wear. These were initially worn by women, who used hairpins to protect them from flying away. However, in the mid-1900s, these became specific to men’s accessories. In current times these are not much in vogue, and therefore not many styles are available, nor are these readily available in hat stores.

What Are Panama Hats for?

Panama hats are classics. These can never go out of fashion because they are most commonly shaped into Fedoras. Fedora is one of the most popular hat styles. However, it is a misconception that Panama hats should always be Fedora. They can even be Trilbies or any other hats, as long as they are made from the Toquilla straw. These are popular beachwear, summer hats and are evenly worn by men and women. This is a vintage-looking Boater hat made of 100% Laichow straw. It is lined with a Twill sweatband and has a two-tone grosgrain band around the crown. It is perfect for Barbershop Quartet members or any period stage performance. You can even wear it on a semi-formal occasion or a Regatta gala, but the most interesting aspect is the raised look of the intricate weaving. This is an elegant Boater hat with a stylish grosgrain ribbon. It is available in five styles varying in ribbon colors. It is Italian craftsmanship and possesses a very robust and durable weave. It is suitable for both men and women and can make the wearer look stylish and stand out. This is a genuine, hand-woven, top quality Montecristi Panama hat made in Montecristi, Ecuador. There are various sizes available for brim, crown, and circumference; therefore, the wearers have various options to choose from. It is very lightweight and perfect for summers. It is available in two colors and can be worn by both men and women. This is a Brisa weave Panama Fedora Hat with buckle closure. It has a 3 inches brim and a 4.5 inches crown. It is perfect for sun protection and comes with a leather chin-strap. The crown is vented to make it highly breathable and perfect to be worn in extremely hot weather. It is available in several sizes and therefore fits mostly wearer of all age-groups.

Both Boater and Panama Hats are straw hats; however, they differ a lot in their shape. But the main difference lies in the material used.

As Panama hats are available in many shapes, they add more variety to the wearer’s wardrobe for several occasions. Further, the wearer can become a part of the Ecuadorian heritage by wearing the Panama hat. Also, the wearer will be the center of attraction among hat connoisseurs who revere its intricate weaving.

However, if the wearer wants to stand out in the crowd, he can try the Boater hat; its distinctive crown is bound to attract attention. 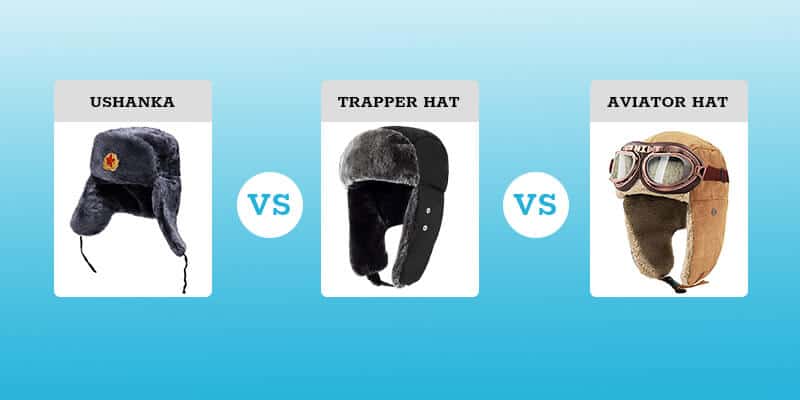 Ushanka vs. Trapper hat vs. Aviator hat (Difference With Pictures)

Hats are quite important, especially in winters. For many people, all the hats are the… So, dad hats. We all love them, don’t we? They complete your ultimate cool and… Flat Caps Vs. Newsboy Caps – The Difference? (With Pictures)

Most of the time, flat cap and newsboy caps are considered to be the same;… Keffiyeh vs Turban. What Is the Difference? (With Pictures)

Keffiyeh vs Turban is not a topic of comparison. It is just a way of… We have all worn caps and hats, but we have seen that some caps retain…